Good Afternoon Yall, yesterday I made the January Bakealong Challenge of Pizza Party Buns. These are designed for those that love cinnamon rolls, but need something savory.

Now I had a perfect plan for my day because I had three wedding cake tastings followed by one of our Movie Nights and what is a better munchie for friends and movies then a savory swirl bun!

I had a bit of a break between the last two tastings when I could start the buns and then finish them just before friends arrived. However, my hopes and plans were dashed when my first tasting decided to switch to a later time aka the start time of my movie night…. I postponed my movie time (our friends tend to run late anyways), but that threw off my baking plans because now my last two tastings were very back to back, but I was now craving pizza so the show must go on!

If you would like to try making these treats here is the recipe: http://www.kingarthurflour.com/recipes/pizza-party-buns-recipe

So just before my tasting I got the dough going. There really was not too much that goes into it. Once it was nicely kneaded thanks to the lovely Mrs. Kitchenaid it was nestled into my oiled bowl and covered before being placed into my oven with the light on – no heat just the oven light makes a wonderfully cozy rising place for my yeast doughs.

So the tasting ran long and it had a longer rising nap then planned, but luckily the first rise of any dough is very forgiving! She just wanted to let me know she was ready by pushing up on the wrap…

Now you will need pizza toppings: a sauce, a cheese, and a small sliced/diced/chopped topping. I went with the suggested pepperoni because it just isn’t pizza without pepperoni, right?! I chopped it up with my chef knife being really cautions with the blade (I just got them back from being sharpened and have cut myself twice on this particular blade which is why I am typing slower today than normal, but that is another story altogether…)

Now the sauce here is where I jumped ship. Basil alfredo sauce is what I used instead of the recommended tomato pizza sauce. I will let you in on a secret…I hate pizza sauce!

Truly, I think it is the worst thing ever and should not be found on pizza. If someone orders pizzas for a party and does not ask my opinion then I will happily eat it because well pizza! That and I am a very content person and appreciate free food, but if I am in charge of ordering pizza or am asked my opinion and red sauce ends up on my pizza the world has officially ended.

To my extreme disgrace I once drove into the next town (growing up our little town had no pizza shops and no one delivered) to pickup pizza and dessert from two different locations. Upon arriving home with everyones specific items I found red sauce on my pizza and went into a sauce colored rage. (I had been very clear that my pizza was to be sauceless and they had given me a hard time about..) I was so upset I called the store to give them an earful and boy did I, but regrettably I realized at the end that I had called the wrong store! Here I was, mortified to have called the shop we had ordered dessert (which was perfectly done) from instead of the true guilty party!

Embarrassing…back to topic. I spread out my glorious white sauce on the rolled out dough.

Adding the chopped topping and cheese. I used mozzarella as suggested, but I had a friend at the party suggest velveeta might have made it creamier/moister so  I might try that next time…

Following step is to cut the log into rounds. I used my bench knife which I love, but had thought about trying floss as many have suggested for such soft tender things, but the only floss I have at home is mint. Mint just did not seem like the thing we were going for so I stuck with my old standby. I chose to do 16 solely because I could just keep cutting things in half. I just was not in the mood to eyeball or measure thirds of anything. It had been one of those days…remember 3 wedding tastings

These tasty looking little savory buns got covered and this time I left them out in the chilly dining room because I had the back to back tastings and would not have time to deal with them on the right schedule so I hoped they would drag their feet on the rising till puffy timeline. I was wrong they got nice and puffy fairly quickly, but did not seem to over-proof. Over-proofing during the second rise is very common especially when you get busy because that is just how life works…

Into the hot oven they went sans the plastic of coarse…

Out came these gloriously delightful tasties!

These Pizza Party Buns were pretty good, but I still stand by my cinnamon rolls for when I want a spiral bun. I am all about the ooey gooey delectableness, but these were fun for something different! You can just see the difference in moisture and gooeyness… 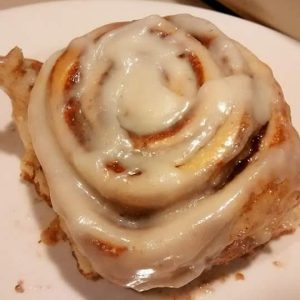 Well that is all folks until next month…..

What is your favorite spiral treat? Do you prefer savor or sweet spirals? Did you try out the recipe? If so what changes did you make? Did you like them? Share your thoughts and feeling in the comments. I would love to here from you! Have a wonderfully blessed week!!!